Fitted (nearly permanently) tested and then pickled a Katadyne Pur Powersurvivor 40E. After struggling to realize the filrer had a missing O ring it works perfectly now  with product water about 200 ppm of disolved solids. I pickled it with 50% mono propylene glycol.  Then to test the emergency disalinator as I had pickling solution. This is a Karadyn MROD  06 ... and it says it was serviced 10 years ago. Considering you need to repickle every year I was taking a chance buying it!. But it makes fine 300 ppm water and works well. 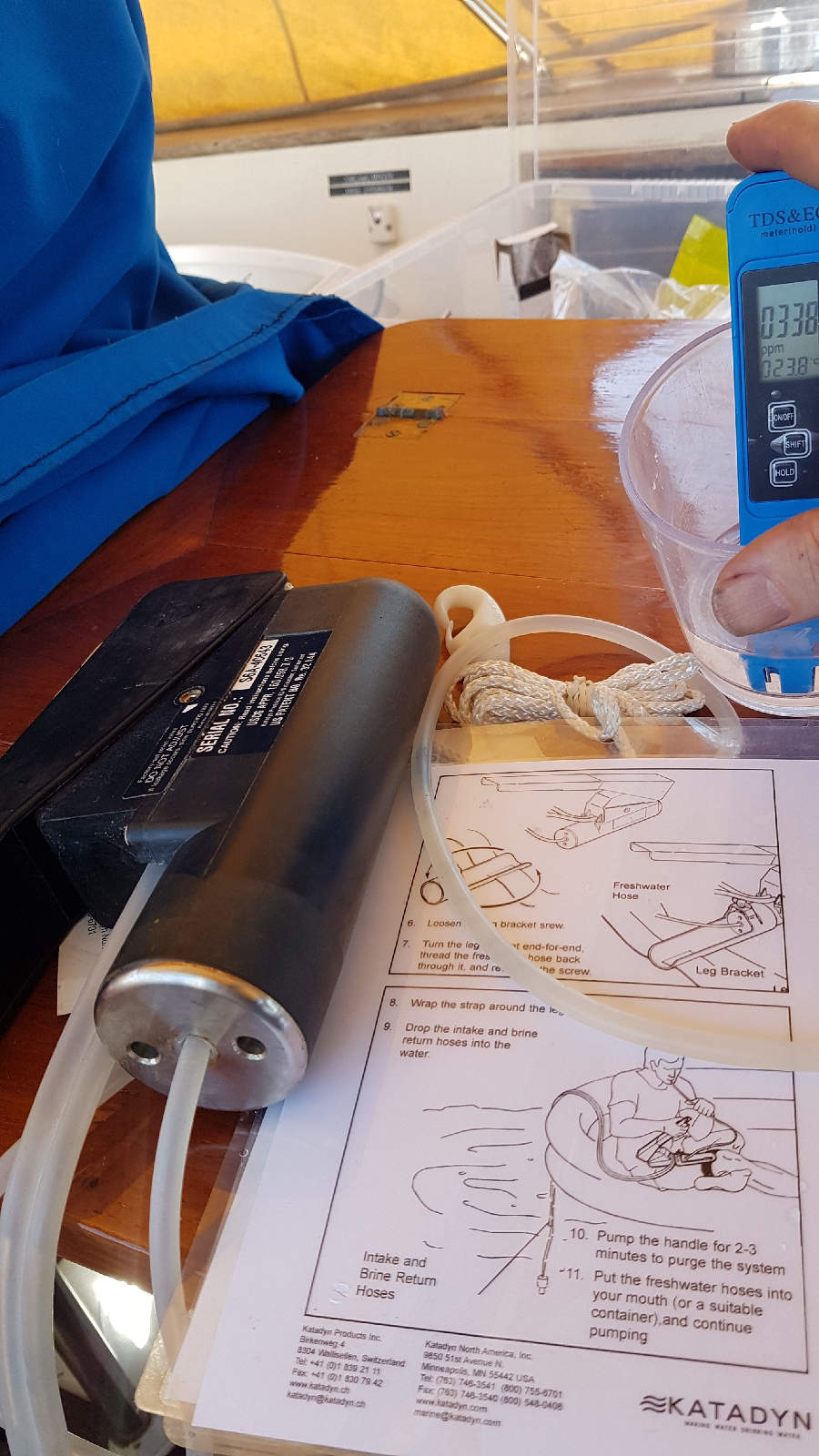 Posted by Billlion at 04:11 No comments:

Where we sailed in the pandemic, Humber to Eyemouth and back!

So sorry for not making a proper blog entry. Summer 2020 we sailed from Grimsby to Eyemough in Scotland  and back. Harbours included Scarborough, Whitby, Hartlepool, Blythe and Amble. Sarah and our kittens were there Grimsby to Scarborough and again for a week in Whitby. For the rest I was single handed. 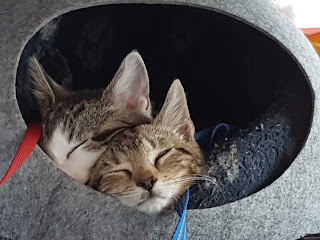 You can see photos on my Google Photos album 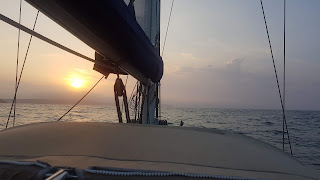 Posted by Billlion at 09:21 No comments:

Fitting a prismatic telescope to a Davis Mk25 sextant

The Davis Mark 25 is good value for a back up sextant, and while not as accurate as a metal one it is lighter and cheaper. Its main failing is you need to calibrate index and side error every time you pick it up.

During the Covid 19 epidemic I am on lockdown and can't go to Tui  but I have the Davis 25 at home and I am practising sun sights with a baking tray of water or oil as  an artificial horizon.

It has a little x3 plastic telescope. It us actually  better than it looks and x3 does help. But I don't have great visual acuity and more magnification would help at least on land

I bought a cheap 8x20 miniature monocular. The objective lens is in a conical tube that unscrews. This allows it to mount in the front scope bracket and tightening it centres the monocular.  The frame that holds the prism and eyepiece fits flush against the rear scop bracket and while the whole is to big it still holds in firmly.

I get a clear sharp view of the sun and its reflection and the field of view is about 5 degrees wide which is plenty. Of course the sun appears bigger and for me easier to judge when superimposed or "kissing".

Last summer we had a great trip, coast hopping down to Burnham on Crouch and back again. On the way back we were a bit late, or the storms were a bit early. Anyway we spend some time in the Royal Norfolk and Suffolk Yacht Club waiting for named storms to pass. Russell and I got to talking about cocked hats and uncertainty, which is something I had given popular talks about to sixth form students (You can see me on YouTube ) .

I looked at the Encyclopedia of Triangle Centres but couldn't make any progress. So I asked its editor Clark Kimberling, who asked Peter Moses. These two are the worlds experts on triangle centres. Peter came back with several triangle centres on the major and minor axes. We did some more work together and the result has just been published in The Journal of Navigation. The Geometry of Elliptical Probability Contours for a Fix using Multiple Lines of Position.

Recently I was in the US for work and got to go to Frank Reed's course on Lunars. at Mystic Seaport. I highly recommend the course and as well as historical interest shooting lunars is a great way to practice getting accurate sextant readings.

..so why aren't we sailing? I hurt my knee working on Tui earlier in the year and I am waiting for it to have recovered enough...hopefully soon.
Posted by Billlion at 04:52 No comments:

Tui's Thorneycroft 154 engine is for sale

Our trusted marine mechanic and Humber Cruising Association member John Foster is fitting a new Beta 50. Meanwhile the Thorneycroft 154 (BMC 2.5) engine is advertised for sale on "Boats and Outboards" here.

Photos of it coming out a few years ago and on a trailer. Also comes with box of spares and paper manuals. 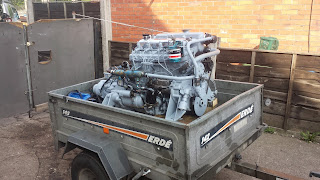 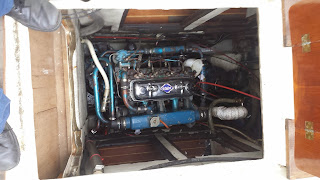 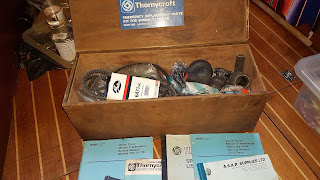 Posted by Billlion at 04:47 No comments:

If you need an HF/MF radio for safety because of the area where you cruise, specifically sea areas A2-A4 (out of VHF range), you need it to be DSC equipped, which basically means an (Icom) M801 or M802 at the moment. The reason is that you can call for help to ships outside VHF range and they keep a continuous automatic watch on DSC MF/HF. If you have that need, and hence get the marine radio, you can use the same radio on ham frequencies if you have an amateur license. They are not quite as good as a ham radio as they are more awkward to use for spinning the tuning knob to find some one transmitting, but they will do. There is loads you can do with a ham radio (or a marine radio on ham frequencies). Ham nets, Winlink mail, sailldocs, loads of different ways of position reporting like robust packed APRS and WSPR. You can talk to random hams around the world and they will think its cool to be talking to someone "Maritime Mobile". Of course some of this definitely contributes to safety as well as fun. For those thinking of taking their ham license it is well worth it if only that you understand radio including propagation and fault fixing much better than a typical course for a Long Range Certificate that qualifies you to operate a marine MF/HF radio (even when this qualification is very serious, like in the UK, with a long practical test by the CG, mainly on distress procedures and a written exam). There are also email services (sailmail) and nets for cruisers on marine HF frequencies. I think this is where cruisers are tempted to, often illegally, use a ham radio only not a marine one. It is usually possible to open them to transmit on these bands. A slight word of caution that the performance might not be the same as on ham bands for which the radio was optimised. Also if you had a ham radio on board it would be a wise precaution to open it to marine (and aviation) MF/HF bands just in case. But these days there are very few places where anyone maintains a listening watch on marine MF/HF voice frequencies. You may well be better off shouting for help on a popular ham frequency and asking them to relay it to a MRCC by telephone in that situation.
Posted by Billlion at 05:45 No comments:

Whitby - there be Whales!

When we were in Hull for repairs Specksioneer, a large motor sailor ketch was waiting to be hauled out. We met her skipper Brian who runs Whitby Whale  Watching. He explained first week of September is the peak in the season for seeing minke whales off Whitby...and so we hatched a plan. It had been a busy summer with Sarah's choir tour in Cost  Rica, and conferences in San Diego and Copenhagen. None of which we sailed to. So it was nice to get a bit of time on Tui as well.

We had an 8 hour run to Scarborough. Literally a  run with the Genoa poled out. We were pleasantly surprised that with care we can get in to Scarborough at low water neaps. I thought it was much less accessible.

Whitby was only three hours further up the coast and as usual the bridge keeper, the harbour master and the marina all work together to make sure you know where you are going. 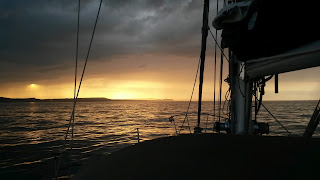 We noticed that the river Esk above the viaduct looks suddenly very rural so we took the dinghy up stream and were rewarded with the sight of fiver herons, and egret and a king fisher catching a fish. 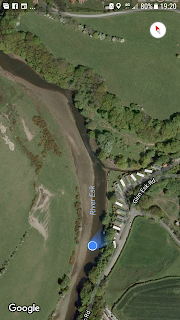 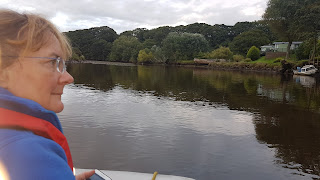 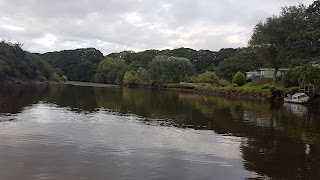 We could see from Maine Traffic that Specksioneer tended to go about 7.5 nm off shore for both morning and evening tours. We decided to do the same and as we passed Specksioneer in the harbour Brian said to call on VHF ch 8 when we were both out there. We learnt that the herring spawn at this time of year and everyone is out to eat them! We saw minke whales surface  a few times as well as seals and lots of sea birds. It was a great day for wild life watching - and a bad day to be a herring!

When the wind turned we headed back, stopping again at Scarborough where we saw a harbour porpoise.

With a beam or close reach, and the tide against us more than with us it took 9 hours back to Grimsby timed nicely with the lock on free flow. Unfortunately one mile of the Fish Dock our engine suddenly stopped. We had 40 gallons of fuel so I knew it wasn't that.  Cranking the engine to try to restart melted the cable terminal on the starer motor solenoid. We called the CG to tell them of the situation before it developed in to anything dangerous, put up the mizzen and unfurled some genoa so we could heave to. A friendly wind cat Eden Rose kept station with us and could not tow us to Fish Dock as they were too wide, but offered to tow us to Victoria Dock. We could have sailed to anchorage like spurn point. But no guarantee I could fix the engine at anchor.  The CG called Clethorpes Inshore life boat who came very quickly. We sailed closer to the lock then they towed us in to moor on the fuelling jetty at HCA. A nice piece of towing with a small inflatable and a 40hp outboard. Once there the problem was found to be a fuel blockage in the primary filter (as well as the burnt out cable on the starter)

Posted by Billlion at 16:11 No comments: